Gaze then daylight, so the debate here is about the remaining spots.

Agree - bit harsh on Stewart. I would've thought he'd be ahead of Lisch and maybe Maher too.

Then again, who knows what the Tigers could've achieved if they'd recruited Stewart to take over from Copeland...

Stewart ahead of Maher. LOL

Anthony Stewart - seriously? LV the OP was (I hope) joking as evidenced by the smiley. You would have him above Maher?

Lisch on the other hand probably does not deserve to appear on this list, at least yet.

I think it's safe to say myself and LV have annointed Stewart as the NBL version of Brian Scalabrine.

Oh phew! Understood now, thanks for the clarification. 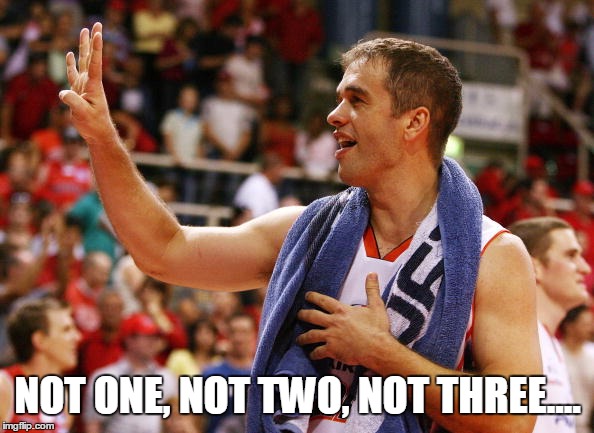 Apart from Anthony Stewart, Kirk Penney is a notable omission.

Lisch does have two MVP's to Penney's one, but I rate Penney's entire body on work in the NBL slightly above Lisch's at this point.

Doesn't the Ice Man Darryl Pearce feature on this list?

Based on talent and not titles or longevity Patty Mills needs to be on that list.

Interesting omission, Pearce. He scored at a better clip than all of the players on this list. In his NBL career he scored at better than a point per minute, with FG% or 45.3 and 3pt% of 41.9%. He also had longevity, playing 14 seasons. Arguably, he was less important to his teams than the guys on this list. He played a lot less minutes per game than each of them did (less than half each of the others).

Darryl Pearce, Al Green (played 1 & 2 spots and must be in one of the lists) and Leroy Loggins (played anywhere) have good cases. Leroy better than anyone except Gaze and the other 2 better than Lisch and probably Copeland

But then, I've always thought of Gaze and Maher as point guards.

Anthony Stewart should clearly be top of the list though.

Based on talent and not titles or longevity Patty Mills needs to be on that list.

He wasn't that great in the time he was here.

On overall career performance Patty would be up there, but in his very short stint in the NBL he actually struggled against the good teams.

As for my top five, so tough, obviously Gaze number one but after that I'll go with these guys (until I decide which one to cut!).

Rose - Almost 500 games in the league, most of the highest quality with the ability to do almost everything on the court. One of only six multiple MVP winners in league history

Penney - In his first four seasons won three scoring titles and one runners-up, only NBL player ever to do so. Then returned at 35 and ranked fourth.

Maher - A genuine star of a team that in five years won three titles and lost G3 of the SFs twice. One of the great big-time shooters but also an incredibly unselfish player who made teammates better

Green - I only caught the tail end of his career but was the standout guard of the early years, was simply too good for defences of the day and was able to score at will. One of the players who made people notice basketball in Australia

Lisch - Gaze and Lisch are the only players to win two MVPs in their first five years, and Kev is also one of only six multiple MVP winners in league history. Winning MVP and BDP in one season caps it for me.

Would Michael Johnson be worthy of a mention?

Super offensive talent. For some reason I always thought of him as a SF but someone older than me might be able to clarify!

Michael Johnson would very much be worth a mention, he was mainly a 3 man in defence. But Darryl Pearce would shade him in the pure 2 spot IMHO.

I always admired Steve Woodberry at SG even after his horrific ankle injury.

I always thought of Rob Rose as a sf, but really he played anywhere

My list is Gaze then stacks of daylight. Then Maher, Copeland, Rose and, I guess Lisch. I think ive been out of the country when hes had his big seasons. I know hes good, just feels weird him being in this list.

Agree with Very Old and Cram above.

Johnson was a pure shooter but played 3 spot a fair bit.

For me, Rose was like the Magic Johnson of NBL - he could play almost anywhere on the court and have a positive impact. I was surprised that the article claimed he was the most under rated player in the NBL. I don't know anyone who saw him play and rates him outside the top 5 NBL players of all time.

Although he was ranked as a PG, I've always thought of Heal as a really short SG. LOL

Surprise nobody has mentioned Rillie?

IIRC correctly he sits 3rd for career 3 pointers, behind Gaze and Heal.
And has the record for the most 3's in a final?

Lisch is still my favourite though.