Who knows what will happen....
Will the taipans play decent ball?
Will wortho annoy another import enough to cop a clip?
Will united run any sort of offence?
Will coach DD continue to have the studs sitting while the bench stinks up the gym?

Must be mates with tommy greer

Only took DD 7 mins. Now we get Wesley jacking up 3s. Fail.

Adnum, Wesley, Tomlinson, Williams and Odigie on the floor together, WTF.

Now Odigie tossed an air ball from the 3 line. Lol

Lol, honestly WTF is DD doing.
This is madness. 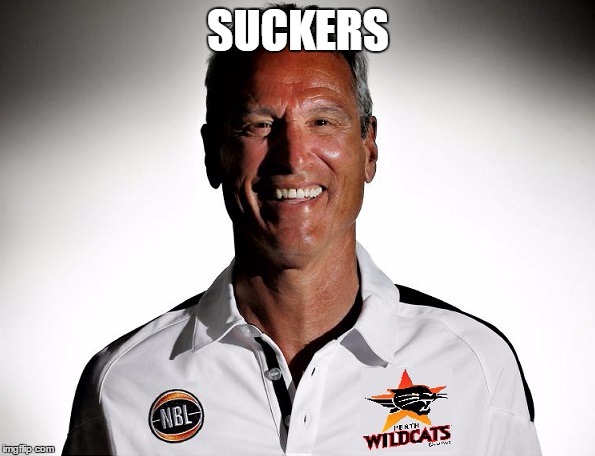 The full court press is one of the most stupid things i have seen on a basketball court.

I always suspected DD was a fifth columnist on behalf of the glorious future Marvin regime.

Odds on DD still being MU's coach by the time they get to the airport?

That was a fun half. I thought it was going to be one way traffic, but then DD brings on the non-scoring jabronies lineup, hands the momentum to Cairns, and they didn't surrender it even once United put the proper team back on.

how come DD never knows what play to call in a timeout surely with all his experience he should know what he is doing.

Luuuc summed up the half perfectly.

The full court press is one of the most stupid things i have seen on a basketball court.

DD will be on a plane back to USA in hours.

I wonder what Cairns' record would be right now with a healthy Trice from game 1.

Make no mistake Melb are making them look better than they are.

DD is coaching this like an under 10s game, making sure all the kids get equal minutes.

Tomlinson acting like he's all that, you're down by 10 to the worst team in the league mate.

Full credit Melb have been balling since 3QT.

LV will be losing it watching these Majok dunks.

I am going to be soooo happy when the Kings lift the trophy at the end of the season.

Blake and Kazzouh to come in.

Good luck everyone else

Anyone know what year David Andersen first played in the NBL?

Did anyone know that Travis Trice played infront of 72000 ppl before ?

Trigger not bad on the call

Jackson is washed up

Yeah I enjoyed trigger too

Wesley is overrated IMO. Why does he persist with the ridicolous 3's. He made a few with the Breakers and all of a sudden thinks he is Klay Thompson

They're shit.
3-3 is actually irrelevent.

Biggest waste of talent in the NBL.

Can't want to get caught up in the DD deprecation, and have to hope United get on with it as the season progresses; so despite the loss, glad I went up to watch this game.
I'd once confidently dissed Eggwu. Again tonight he made those comments look silly.
Don't know how he does it, and it certainly ain't classy, but he makes a real contribution.
Still, Taipans looked like they would retain the script from previous games and give it away in the 4th. United needed more minutes, just like Wildcats got for themselves.
Taipans to string some wins away? Not all that likely on present form.

I'd say making the top 4 is the most important thing, and if you're 50/50 prior to developing chemistry - which often takes a little while with stacked sides - then you probably aren't going to overreact and throw all the toys out of the cot.

Warriors got crushed by Spurs on opening night and Miami Heat took more than a few months to develop their stacked side 5 years ago.

I'm not worried for United after just 6 games in a pretty tight and even league.

Train, yeah sorry, forgot the NBL website is perpetually out of date.

Struggling big time - dropped to 3-4, so much talent, such little heart. The system (if there is one) doesn't work, there are glimpses of chemistry but never seems to last more than 3 mins at a time, often when we are already 10 points down.

Wesley is all about himself and never stops complaining about calls. I am struggling to like him. Cedric needs to never shoot the 3 ball again but can keep delivering those tasty dishes. Maybe give Devin Williams a ticket to the Melbourne Cup so he can complete his Graduation holiday and then put him on a plane home the next afternoon. Hell, take DD with you Aiiight!

All that said, well done to Cairns, completely outplayed us and showed what you can do if you stick together as a TEAM and WORK HARD.

Hope United can be turn it around - Breakers then Kings to come....no easy wins out there!

So 25% of the season already over for them.

Great game from Cairns. Held their nerve in the final quarter, when MU looked like they might bring it home. Full credit to Fearne for not calling a time out, instead letting the team work it out and gain some confidence in themselves.

Hopefully a break-out game for DoubleT. Wortho was awesome, as was Egwu. Nate's game will probably be underestimated tonight. He played well. Good to see Edwin continue to shoot the 3, even if he looked a little hesitant to shoot it for a short stretch. Anyone remember Wilbekin's horror 3pt shooting stretch a couple of years ago?

Only saw 1st half so far.

I'm done talking about DD- we all agree he isn’t quite the guy to lead United to glory.

But he’s not the only problem. Jackson is, as Mark Dickel said, not the player he was 3-4 years ago. Andersen doesn’t even look like the player he was in Rio 2 months ago. With Goulding missing, they just aren’t as stacked with talent as we thought, given that two of the supposed elite talents don’t look elite.

Also, give credit where it’s due. Cairns have a decent import trio, big Jawai in the paint who looks in better shape than last year, jack of all trades Wortho at forward, and Gliddon, a fundamentally sound shooting guard who will keep the scoreboard ticking over. And then a bunch of other guys who can all play a role. If they’re the worst team in the league as the bookies suggest, then it’s just more evidence of how strong the NBL is this season.

And of course they have Fearne coaching, who's coached for 7 seasons with the Taipans being consistently competitive, and arguably over achieving in that time, having made two grand finals. It's a solid group with a solid coach.

Sportsbet would tell you they'll win 7 or 8 games for the season. I think they'll do better.

United should be looking at another (former) North Queensland-based coach, IMO.

SD did more with much much less last year. A no brainer.

Doesn't a contract become guaranteed after 7 games? Or is it once they've passed 7, ie: Played 8?

If the latter, this is the last chance to sack Williams before they have to pay out his full contract. Is that how it works?

From memory after Johnson got sacked, I think its once they've played 8 games or played for 2 months (depending on what occurs first). Not 100% sure on it, but I think I remember reading that somewhere.

Why don't they just de-activate him.

Just a small comment on the (lack of) coaching. They let Trice drive to his right for an easy layup quite a few times last night.

You would be disappointed with a junior coach who didn't adjust to that.

I actually thought Williams showed a bit of gumption last night. He got pushed around by Nate for a while (which is not an indictment at all, let's face it, he's huge), then played some pretty good D after his third foul.

He really isn't a consideration in MU's offence at all, so his lack of points shouldn't be an issue. He's far from Melbourne's biggest problem at the moment, as other posters have suggested. Jackson was MIA last night. I don't know why Andersen wasn't given more minutes, because Wesley was terrible. Moore was okay in patches, but Blanchfield was a waste of space.

I'm with Free, it's baffling.

Deactivate DD and bring in Gaze