Second and third on the ladder. Both with 6-5 records.

Is Bairstow still out for Brisbane? NBL preview lists him as in but without much emphasis.

Do Brisbane have the guard ranks to throw Martin-less Perth off their game?

The NBL preview notes that with a bad round, either of these sides could go from equal second to equal last on the ladder.

Brisbane by 6. Perth are terrible at the minute and Brissy should get it done.

I'm going to this one before I head back east in a few days.
1. Will be on the lookout for Dazz again.
2. My new Gleeson is a flog sign is ready to go...
3. Interesting to see if the Perth backcourt can protect the ball and run the offence tonight. My prediction is no.
4. Hopefully it's a big crowd and a close game.

Perth to be down double digits at half time. Dazz to lose his sh!t shortly thereafter. 95% of Perth fans to think the world is coming to an end when they go 0-2 this weekend and plummet down the ladder. Geez I hope the Gleeson sign gets some air time on Fox, maybe stash it under a shirt / jacket until your guaranteed some tv coverage!

I reckon Perth will hang tough, they have been going better than I anticipated since losing Martin.

ROFL, Have you seen the movie Get Hard?

A good instructional movie on how to get items past security checks. Here's a link to a particular scene that may be helpful in getting the sign into the venue:


Oh and I too hope to see the sign and hope you and Dazz can share a beer.

Two issues of great interest for me tonight.

1) The number of chairs on the Perth bench.

2) If the imaginary flog coach box is again introduced and if it is (I am at extreme excitement levels in anticipation)will the hybrid two step version (where it is at full height to a certain pre determined by the ref location and then merges into a lower level box that you can crouch into to extend you range)still exist.

The second he stepped forward, Aylen should have teched him. He asks for a tech every game, hopefully some refs grow some coconuts and start reminding that yes he is a tool and that respect goes a long way to being a half decent coach.

DD, Joey? why everyone points out Gleeson?

He was clearly told to move back by Aylen twice, then when he did and Aylen went to give the ball to the Hawks, the smug flog walks forward again knowing full well what he was doing. There is a reason all of the League outside of WA hate the bloke, and I imagine it's the same reason half the people in WA with any but if basketball knowledge, dislike the guy too. That same group of people would have Bevo back in a heartbeat if it meant getting some respect and decent coaching back at the Cats

Agreed. He isn't doing the cats many favours getting techs in crucial times of the game. He would do better thinking about some of his questionable sub rotations in those moments and give us every chance to win. Seriously, what are the players thinking while he is carrying on like this in key moments?

Generous applause for beal and Jervis

Falling off the wagon much

I bet Jermaine is enjoying this immensely

JJ is so trash

Imagine the thunderous applause if Beal and JJ swapped jersey and team there :p

For the love of Cthulhu, can Robbins please stop saying "we" when he's commentating... Pretend you're impartial, buddy.

Going to get ugly for the Cats, visibly tiring and struggling to keep up.

I can't see this Perth team, as presented finishing top 4 in this league. They offer zero offensively, prob the worst imports in the league, noting Prather is a gun, and to be honest they are boring as shit to watch.

This reminds me of away games we played versus Townsville last year. Terrible basketball. Once again Perths inability to be a threat from behind the arc is really hurting them.

When Beal has a fire lit under him, he really steps up... it's just a shame that it doesn't happen more often.

Dour game with both teams struggling to really hit their straps, but Brisbane executing better

Perth has little offensively without Prather playing a starring role.

Since when has anyone ever been able to wear a black T shirt under a white singlet.

Knight now has a hip injury?

He got hit in the balls. He might have twisted testicals which is very, very painfull

NBL TV working right now. For how long who knows.

Kinda hard to see exactly what he did there. He didn't hit the court particularly hard when he fell, it might have been when he stumbled a little awkwardly before the fall, a dislocation or labral tear? He was in a ton of pain, that's for sure.

Hip, they said. There would be 5 or 6 players on the court now wearing illegal clothing. Yet the refs let it go.

Perth are not wining the title this year. Losing Jawai, Beal an Jervis has been huge.

The Penny has dropped for Gleeson, Bragg is much better then Wroe.

Why no Angus Brandt?

Bill on the ball
Years ago

Brandt, JJ, Wroe and Redhage will face the knife next year.

Yeah, I figured Brandt going to Perth would be great for his career because defensive intensity was the one big thing lacking in his game last year, but I guess not.

Biggest defeat for the Cats at that arena. It can only get worse.

If it counts they said will be the Wildcats biggest loss at Perth Arena.

They also said Wildcats haven't lost three games in a row at home since 2005.

Matt Knight is not the guy we were hoping to have a season ending injury on....

Missed all gameplay tonight, caught some boxscore action only. Anything noteworthy happen during the game? I can pick up that Knight is somehow hurt and Gibbo mad a half court three?

1- JJ is trash
2 - knight is trash and injury prone (well seems as per history to be the worst injury at the time but has a tendency to heal within days)
3- they need a true scorer a John Rillie, Chris Goulding type player not a slasher that's what Prather is there for

Unfortunately MK should retire. Redhage too. You need to be able to walk when you get t0 40+ or 50+

Worst game of basketball i have seen this year. The game is being over umpired.
Totally boring.
Worst Wildcats team ever

I want to like JJ... but I can see he's really not a good fit and struggling. Surely there are some decent 2 guards available in the world.

sos, I give it to Saturday night? Gleeson is gone and import change.

that's embarrassing, not because we lost, the way we lost.

no heart and no balls

Wildcats paying for a weak offseason in terms of recruiting. Most teams have bought in a premiere Australian or have very effective imports.

Wont make finals as lack scoring options in general. JJ sadly should have left the first time and Jameel is more a role player who wont give you scores like a Craig.

Considering how many fans they get to game and general support they seem to look cheap on their recruiting compared to much of the other teams.

Why cant they just bring in some decent imports. At least a SG to help spread the floor. Forget about saving face from having to deactivate JJ twice. Its a pro sport and this team isnt getting it done.

surely greg hire is the worst player in the NBL!!!

'Considering how many fans they get to game and general support they seem to look cheap on their recruiting compared to much of the other teams.'


Totally agree! And their imports lack of experience is really showing with their silly turnovers and poor decision making down the stretch

Also during all that time long before the stretch

Dazz deserves to make a panic thread after this one. Knight goes down and wildcats get blown out at home for the first time in recent memory. Would have to dust off the record books for the last time we were down 20 at half time at home

Bill on the ball
Years ago

This season is gone unless Damian makes a super recovery and JJ gets back into form.

Jesse Wagstaff has fallen off too. Hire is obviously affected being a new father.

Unfortunately our memberships pay for inflatable mascots not effective imports

So NOW am I allowed to get depressed?

I can't really figure the Cats out.
Coming of a championship, we should have had money in the bank, and been poised to capitalise. The changes to the league were announced early, and it quickly became apparent that other teams were going to step up massively.
The league has moved on, and we have gone backwards.
OK, I can understand them not spending $0.5M to get an Aussie from Europe. As Marvin said, cheaper (and easier) to get imports.
I can understand them not re-signing Jawai (Although it would have been nice to keep him AND get another import).
I can understand them releasing Jervis.
I could have understood them releasing Beal, on the assumption we were going for something better.
Instead they have gone shopping in the Bargain-Basement of Imports.

Both JJ & McKay are the kind of role-player Cairns goes looking for on a limited budget, or Adelaide after they've spent the farm on a star.
They are NOT what you go looking for when your local talent is aging and not great offensively.

It's not the end of the world, but what we are seeing is a Cats team that has really fallen back to the pack, in a big way.

And lets be honest, when you rely so heavily on Knight, you know that's a recipe for disaster. You just know he's going to be injured at some point.
Hope this one isn't too bad.

Wildcats stunk up the arena tonight.

I had my sign going for 1/2 the game. One dude came up and said hello.
Good times.

Wildcats are actually shit. The streak will end this year. They're cooked.

Really happy with this result. Not a bullets fan but just rest to see the cats suck. I mean they are really vulnerable. Dazz maybe you need to push your redhage injury fake bullshit a bit more.

Knight is a faking flog.
He always plays up to the injuries as anon alluded to before.
Delist that spud.

Dazz hit the nail on the head.

Martin's absence really hurting not just because of what we miss from him but because the back ups are not up to it. Kenny and wroe were poor and Bragg tried hard but his inexperience shows 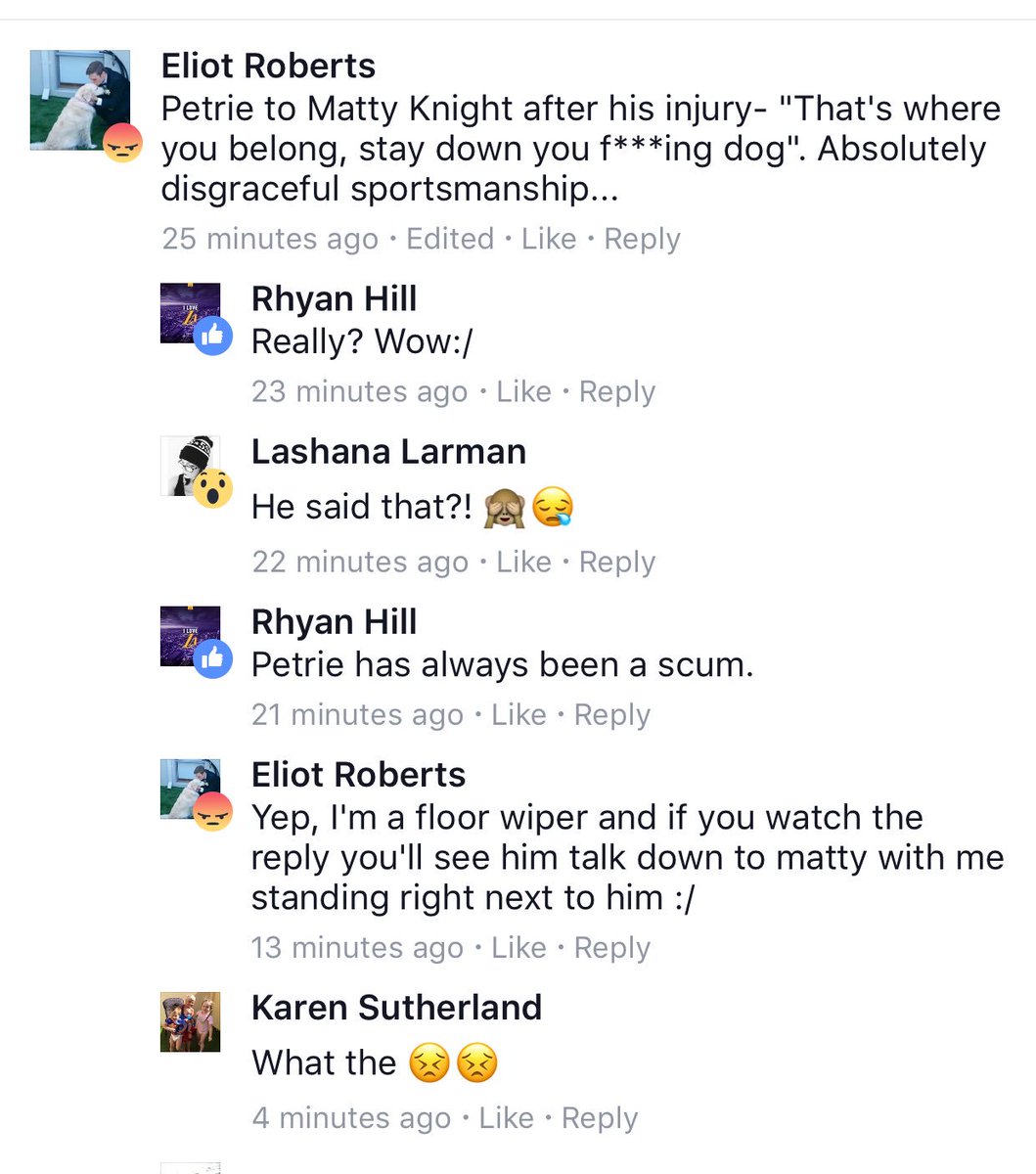 That deserves a new thread Kobe

That sideline reporter tonight was bae

Miss Heal as a commentator. Would have like to have heard more talk from the commentators on what wildcats are doing wrong, what they need to change. Stating the obvious anyone can do.

So you think Shyla is the best person for the job?

I thought the technical was for delay of game. Brisbane already had a warning and he held the ball after the score.

Did Petrie really say that? Flog doesn't even begin to describe it.

Yeah RE the imports, no idea why they went all bargain basement considering how cashed up the Cats are.

I can't see much light at the end of the tunnel. Damo isn't due back until mid Jan or something.