I've been a fan of the NBL since the early 90's and I can't remember a season quite like this one. For a long time the NBL has sought parity in the league and I think it's pretty damn close.

As a one eyed cats fan I really wouldn't be too cut if they didn't make the finals, there has been so many close and entertaining games in 2016/17.

The return of quality players that have been playing overseas of the likes of Andersen and Newley, the addition of NBL newcomers Bairstow, McCaron and a import class of Ware, Randle, Cotton, Boone, Powell, Mitchell and Dillon has just made the NBL a dream to watch.

Big crowds in Melbourne, Sydney and Perth (Most teams actually).

NBL Live while has had some problems has been pretty much flawless for myself.

I'm loving the NBL this year.

I think it's been great. Closing in on the final round and any team bar one can make the post-season. And that team would've been in the mix if not for injuries. Oh, and the team we all tipped for last is top of the ladder.

If they can keep a few of these great imports, recruit their third imports a bit more wisely and keep everything else rolling, 2017/18 should be strong too.

Makes you wonder how more close it would be if Brisbane wasn't destroyed by inuries - they were 2nd not that long ago lol.

I think this has been the best and most enjoyable season since I started following the NBL in the early 90's and not just because of the Sixers fairy tale season so far.

To have such parity across the league that 7 of the 8 teams can still make the playoffs entering the final round of the season is something I never would've envisioned under this LK model.

I also think LK & the NBL deserve huge props for getting NBL TV to where it is now. I've gladly paid my $5 a month to watch every game and in doing so it increases fan interest across the whole league not just specific to your team.

I'll tell you on Sunday evening whether this has been one of the great NBL seasons, or whether it is the most shit season since 1986
:p

The best part is the league got parity without the stupid points system!

Jeremy Loeliger was interviewed during one of the games last week(can't remember which one) and said that there was some exciting announcements to come over the off season. Can't wait to see what next season brings already.

NBL is soaring.
We have a lot to cheer for.
If they can fix the refs and build a bigger presence in the media/news then things will only get better from here.

"I also think LK & the NBL deserve huge props for getting NBL TV to where it is now. I've gladly paid my $5 a month to watch every game and in doing so it increases fan interest across the whole league not just specific to your team."

Agreed, I've watched almost every game of the season at the expense of my GF's sanity and her being sick of hearing about the league.

We've got a lot to celebrate 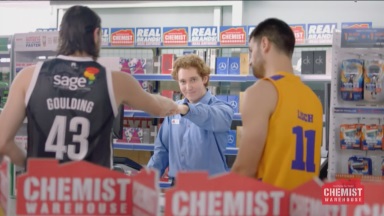 LK has done so much for the NBL. People were very critical of him taking ownership but he is NBL god right now.

What's everyone's thoughts on NBL TV this year. I know there has been some problems recently but all in all I think it has been miles above its predecessors . I've watched a lot of games using their Platform and I'd rate it a A-/B+.

Yeah it's been incredible. So close so many twits. If Perth don't make it to the playoffs even better.

Off the top of my head, I can't recall a closer season, and that's got to be good. End of the day we all hope our teams make it, but at least most of us have hopes right up until the last round.

That said, I don't believe that anybody should be taking credit for it, or claiming that something "worked."

It's entirely evident that the two biggest spending teams, also hired the two most incompetent coaches.

And lets be honest, Perth fucked up their recruiting, got knackered by injuries, and are still in the fight.

Joey has done a superb job maximising what he's got, has had a stable core, and been incredibly lucky with injuries.

What I'm saying is that circumstances have combined to deliver a fairy-tale season for Adelaide, and a very even season for everyone else. I wouldn't count on a repeat under the current rules.

Easily the best season I can remember- huge crowds every time I put the tv on, fox sports coverage is 10/10, the league is prob the highest standard I can remember. Perhaps a few weak imports, but the local talent is the best it's been in 25 years

Been an NBL junkie since watching Cats V Bullets 87 and was at the "airport" for way too late for a young fella for the 90 'ship. Have gone off the Cats lately having dropped the expensive membership a couple of years ago and the way overpriced Foxtel in the last few months. Call me a soft target but this year has still been incredible with the media interest and the closeness of the league. That all you can ask for so kudos to the NBL ownership/management.

Good but not great, there has been some really ugly basketball, for mine less really high quality basketball. Parity is good,butI don't think parity alone is a sign of a healthy competition.

I haven't watched all teams play weekly since earlier in the season, maybe having to watch whatever it is the cats havery dished up is tainting my point of view, but I don't think the standard of basketball has been overly high, free flowing or exciting.

I've been following the NBL since 87 as well and this by far has been the tightest season on record. I think the league is finally back in a good space. Hopefully we can add a team or two in the coming years and make some significant improvements in the consistency of the refereeing. It's been the biggest slight for the competition which in so many ways has moved forward in the right direction this year.

Very enjoyable season from a visibility and engagement point of view. Having a very tight ladder has helped keep interest strong, and i suppose if your team misses the finals it probably just means they were dead unlucky because this has been the most competitive season I can remember. Social media has been great and NBL TV has improved greatly (for me anyway)

Hopefully bigger things to come - more media attention would be great, refeering standards to improve, crowds of 10,000+ seen more frequently in Melbourne and Sydney, joining Perth. Full houses around the league. Plus stronger Fox ratings, and hopefully down the track a FTA game played during prime time (as opposed to sunday afternoons). So much evidence of this happening this season that these should trend upwards going forward.

Lets give the A-League and BBL something to think about as the NBL is coming back!

I was all Buzz from Mid-October to Mid-december, couldn't stop thinking about NBL had it on the Brain, then mid-december (e.g. Dec 15 had an almost 2 week break e.g. 7 weeks e.g. taken up by chrissy/new year/some boring games/then Tennis/hot weather etc) then back into it from last weekend Kings vs United game so much noise. Where as 1990-2000 I barley missed a game, the hype was consistent and strong. 1992 Dwayne Mclain at Kings were huge in sydney far more hype than Josh Powell or kevin lisch. Steve Blake got a lot of hype, and was much maligned fairly or unfairly. This week in NBL will be huge. Play offs will be good to.

Some big steps in the right direction this year. I still think reffing is a huge issue in the league and hope something can be done to improve it next year. Other then that the product the league is putting out has been a huge improvement, as well as the quality of teams and interest of fans. Would love to somehow see it get more media attention and maybe another game or two each week televised next year.

If you follow the checklist compared to NBL history:

For me there isn't another season that matches this one in all those areas. While we take it for granted, the fact every game is on TV is the absolute icing on the cake.

In terms of standard, I always said around 99-02 was the peak, with the last couple of years around that level, but I think this year has set a new mark. Hopefully teams can sustainably maintain these rosters.

This season has been great, easily the best in the last 16 years since I've been following somewhat closely.

NBL TV has been great for me, and the pricepoint is perfect. The app has been very good for following stats and checking the ladder.

Huge upgrade on those fronts from past years.

Lost In The Sky
Years ago

Ingles... As it currently stands.

I'd take it that NZB & PER make it in to the finals as they would both be 2-1 in the mini-series against PER, NZB, MEL, CRN.

Both MEL & CRN would be 1-2 against the other teams so they are out. NZB would finish over PER I think due to NZB winning the PER v NZB series.


However PER if they win BOTH games will go to second as they hold the split on ILW.


Hope that's not to confusing.

NBL are doing some nice work on social media in general.
I just wish the league's website wasn't such a bloated mess.

I also wish the stats page had a filter for teams in addition to some of the fairly useless ones it does include. I get that that might be a tad problematic due to historical teams cluttering it up, so just don't include them. I'm pretty sure that most people looking at stats would be looking at the present season.

Its been a great competition this season despite the large number of players forced to miss so many games due to injury.
Feels like some of those injuries and some of the import changes have disrupted teams a bit with some games recently becoming more of a grind.
Also feels like the flopping thing has got much worse instead of better, possibly due to the inconsistency of the calls.
Despite concerns by many its also great to see the clubs we suspect are the lower spending teams ( Adelaide, Illawara, Cairns) are right in the mix, proving the LK is not setting this all up for his team and that money doesn't guarantee a championship.