Not the way you want to start the season. Disappointing too, he looked like he'd crank some highlights along the way.

shades of John Williamson in 2011

Shame - was looking forward to seeing a big, athletic import alongside DJ and the improving Hodgson.

Yeah the timing of Randle's comment was very peculiar...

Guys whatever you do, dont repeat the comments here for anyone who asked about them!

Possibly just being nice but he was released not long after he made the comment.

"I want to wish Ronald Roberts a good season in adelaide heard he's a good player and even better person, get alone with everyone and is a work horse" good luck"

Jerome has been a tad salty lately. Might be nothing in it. Hope 6ers have a replacement lined up.

More importantly who is going to be the replacement??

He has tweeted that he is 100% fine and the news of his injuries are false.

So either he is lying to get that next contract or Sixers have someone decent lined up?

Dunno that McKay would be an upgrade.

If McKay was release for smoking a pipe as previously suggested, is this the type of player we want in our club?

Well something is not right.

If its not injury related, the Sixers don't have to lie, they can just cut Roberts because they want someone better.

Ronald Roberts was released after being found out as a spy planted into the 36ers organisation by Jerome Randle's management.

He got dumped to avoid all the typos that would be made during the season by everyone calling him Roland Roberts after that Kings import who injured himself during the all-star game dunk contest.

I really don't understand why this stuff goes down like this. If he's not injured then claiming he is publicly to "explain" his axing is ridiculous because it's easily proven false. Fans and members i'm sure would be far more comfortable if, the statement was just "He didn't fit the Team chemistry the way we expected so we're moving in another direction". That way you don't have to air any dirty laundry, you're not throwing out paper-thin lies that the media can poke holes through and everyone can move on. So frustrating.

The only thing I can think of that would be justifiable is if he is OK to go right now but it looks like it will be an ongoing issue throughout the season. He has had 2 season ending knee injuries in his past 2 gigs, if I remember correctly.

Reason is that the player doesn't get a black mark against their name for being hard to work with.

Having a small injury that can be overcome is a gracious exit for both parties. Another term used is for family reasons.

Exactly Dome Rat. The favour Sixers are doing for him seems to have been overlooked by Roberts.

Dome Rat, if that were the case why did he apparently come out and deny that he's injured? That does nothing but fuel rumour and speculation.

But the team can come out with honesty and still achieve gracious exit.

Johnson came out with no black mark, Wildcats retained their tag of being heartless bastards only wanting win win win. All good.

JJ's exit was a whole other issue

It is the done thing in sports, I don't necessarily agree with it and always think honesty is better for all in the long term

I don't see the harm in saying it didn't work out for us or the player. I think people would understand that. In the NBA you can trade away these issues.

Even if he wasn't legitimately injured the club saying so can be viewed as doing a good thing by him rather than say he was a problem in the locker room, as pointed out above.

I dare say the reason he's denying he's injured is to avoid being tagged as an injury prone player given his history.

Surely clubs do research and see if the player is a fuckhead or not??

Not necessarily, we signed Randle didn't we?

True but randles play made up for it

Dome Rat, if that were the case why did he apparently come out and deny that he's injured? That does nothing but fuel rumour and speculation.

Not willing to accept the reason why he might have actually been cut? More worried about being tagged as injury prone?

You could put it down to a petty difference, though (a) I don't think they'd make a drastic decision based on one, (b) if a player can't work through something minor, they could be a serious chemistry issue when things get tough - losing streak, run of bad form, finals, etc.

His denying of injury would be to assist him get a gig somewhere else. Boy is injured... might not be season ending but he's clearly not fit and clearly has no class.

But that status of injured or not is also very easily validated with a medical which the next team would almost certainly insist upon.

Why would he lie about being 100% fit if that is easily proven otherwise?

If Roberts passes his next medical (within a short period of time) then something else is afoot.

It's pretty clear, Adelaide don't want to risk losing RR for multiple games during the season.

RR may not be injured, but he can't play at the level required.

Adelaide let him go because they don't want the risk. RR is pissed off because he just wants a gig and knows he's going to be labelled as injury prone. 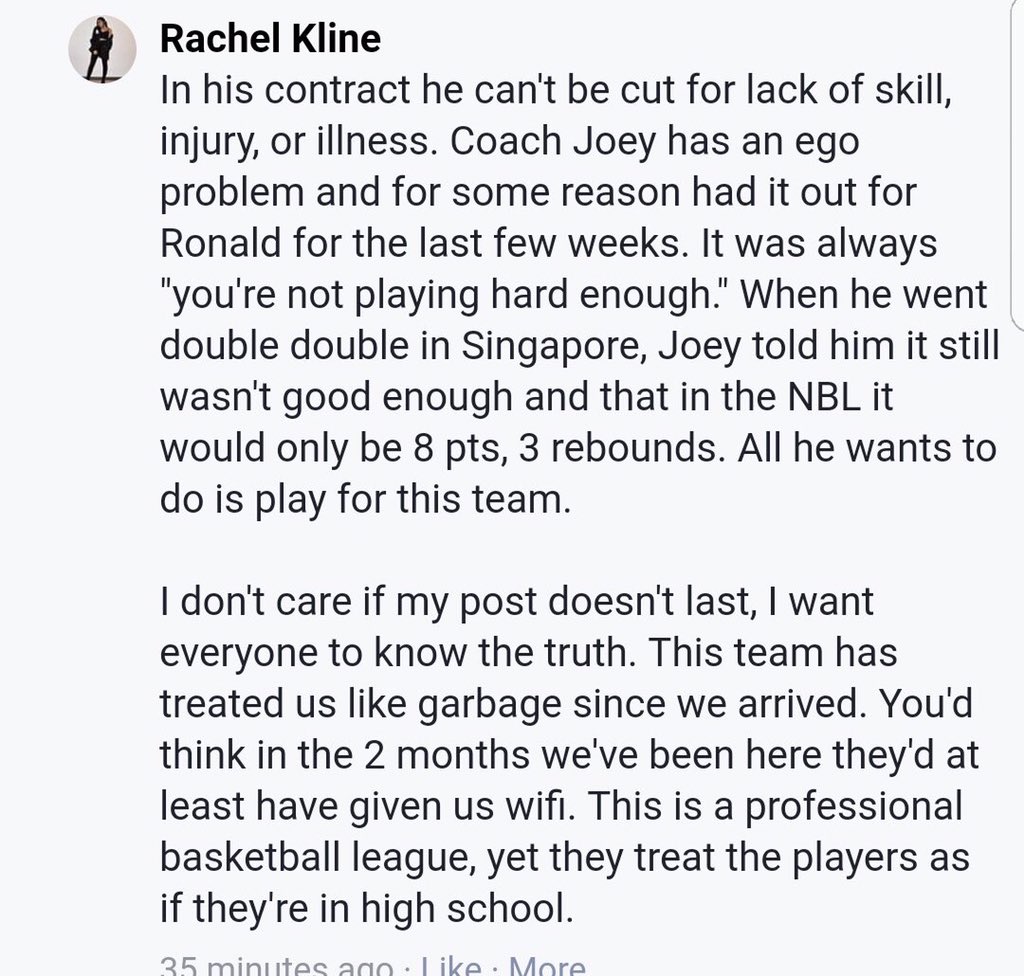 Well Joey is right. Merlion Cup standard isn't up to that of the NBL. And wow at the wifi comment? You get a accommodation sorted by your club, arranging internet connection is on you. Another partner/wife of an import who is a bit crazy.

* complains to landlord there is no wifi *

Luckily Joey is black otherwise imagine what else the sacked import and his woman would be alledging. You know what I'm sayin'?

Thats so they can keep an eye on LinkedIn.

No organisation in their right mind would waive their right to cut a player due to injuries. What is this woman on??

Ahhh the season is upon us with the first controversy :)

Roberts was cut because he wasn't everything Randle said he was.

For all the conspiracies about the wildcats last year, nothing ever came out contrary to the very clean media releases. Not a great development for the 36ers to start the year.

For all the conspiracies about the wildcats last year, nothing ever came out contrary to the very clean media releases.

A failed drug test was strongly rumoured almost immediately, before eventually being confirmed by the NBL.

Fair enough for the coach to ask someone to play harder and put in more effort. Fans would expect that of their coach and players. For a player and partner to be shocked by that is telling, I would think.

I think the implication is that he used an injury as an excuse for not playing harder, was cut for being injured, then claimed not to be injured at all.

Your effort levels are within your control and have a direct bearing on your ongoing success and employment. How many times do we see fairly plain players sticking in this league because they work hard - Boucher, Teys, Tovey, Greer, White, etc. Craig is a great import example too - moving from the bench to eventually an NBA chance.

Sometimes there's a miss communication between player and coach.

Happened to Rashad Tucker in his time at the Wildcats.

He'd miss games and training sessions due to knee soreness. Was he injured, probably not. Was he sore? Probably so. Some Players play through it but not all players are willing to take that risk.

"Sometimes there's a miss communication between player and coach.

Happened to Rashad Tucker in his time at the Wildcats."

This sacking was handled poorly by the Cats, if only because they told the public (one of the real) the real reason(s) he was sacked. His attitude was poor, plain and simple, but it also gave him ammo to respond and made the sacking seem even more controversial.

From some player's perspectives, taking a day off from training due to soreness is keeping yourself ready for the actual games. From a coaches perspective, taking a break from training when you are OK to play a game is laziness. Sounds like that's what happened here.

He didn't take a day off, he took weeks off and refused to train

That post by the missus just sounds like a childish tantrum from someone who doesn't really know how the world works.
Joey will ride his players if he thinks they can do better, and that's kinda the job of a coach. As a member i'd be disappointed if he wasn't pushing our players to the edge. I have no doubt he can be abrasive some times. He seems like a passionate kinda guy who will give you a spray. People will take issue with that, but as she says, this is a professional league, not high school. Man up.
The Singapore tournament was definitely a lower tier of talent than the NBL. A double double in Singapore would not translate to one in NBL. This is just a fact. Oh no, Joey told him a fact about his performance in order to try to spur him on. What a nasty guy.
"They haven't even given us WiFi" sounds like you're just trying to find another excuse because you don't have enough material to warrant a social media spray. I find it very hard to believe they've been treated like garbage. I'm not on the inside by any means, but Big Joe seems to go above and beyond when it comes to preparing accommodation, transportation etc for new players and imports. Some of that work has been shared publicly on social media or talked about by previous players like Eric and Terrance from last year. Young guys away from home given support by the club's administration. I won't even start on the fact that WiFi doesn't equal internet so who knows if there was an ISP issue, or just a config issue on a router or what. Try a bit of independence and solve some problems for yourself!

In the space of 24 hours I've gone from thinking the club has (again) dropped the ball to now thinking that the club is probably a bit stiff that a cut player is being a bit juvenile and trying to throw a bit of mud. Olgun seems to like digging the dirt, maybe he can dredge up the whole story.

I got an error trying to embed the tweet, apologies for the link. This is apparently Joey's response to Ronald saying he's uninjured.