WOW! Who would have thought this game would be a key banger!

SEM - A win, a good win, could seem them jump back into 3rd.
Taipans - A win sees them have more wins than the Breakers and really puts a bit of curry on the tails of those Kiwis.

Cairns took care of the Breakers a few days ago and SEM were the first casualty of the Kings this round, to slump to three losses in a row.

Could the Snakes go into this home game as favourites?

SEM in a close one, looking forward to see if Dufflemier can play that well again. Creek to start and go big time, no one from Cairns can stop him.

Viceland is airing what looks like a replay of the Wagstaff missed layup game in lieu of today's cancelled fixture. Who knew SBS were also Wildcats haters!

It's the win from the week before.

It's the win from the week before.

I stand corrected. That's nice of them.

That's ok Perthworld people like us make mistakes that's why it's great to have Koberulz and his intelligence to correct us when we are wrong.

koberulz living rent free in the minds of so many

Back to eight points.

That's not how rent works.

Nice work Einstein. Such a douche

Who do you "support" lovebroker?

I know there's other external factors (e.g. Covid), but the standard of the league has been really down this year - admittedly, it has been a tough watch in some games;

It was great early, but it's seriously dropped off since the Cup.

It is when you recruit an overweight import and your centre can't be f##ked staying with the team.

The entire league is fatigued. It was bound to happen

How good is SEM

No Sykes, no Broekhoff, no worries, 20 point win in Cairns

Cairns won't win many games with their current team though.

Aren't you a Melb United fan?
No Oliver, Deng or Noi for Cairns.

Good to see Creek back in starting line up.

"The entire league is fatigued."

While it's possible to adjust training and practice to manage the impact of playing a few more games, you can't really adjust for the impact of extra interstate travel and time away from home, of that order.

By way of comparison, Melbourne teams have traveled interstate for 15 games between them this season - so about once every second week for each of them.

That completely ignores that there was no travel for anyone throughout the NBL Cup.

It seems like not travelling agreed with high scoring.
Team points per game was at its highest for the season during the cup, dropped off immediately after the cup was decided, and has yet to return to pre-cup levels

Average team totals (including OT) by round: 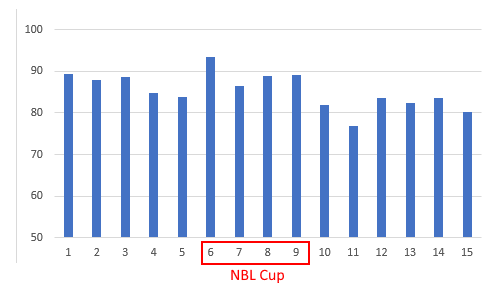 (I'm not saying that high scoring = high quality, but I think it does affect the overall perception when the average is 80 and you're regularly seeing numbers in the 60s)

Playing on the same court with the same rims 8 straight games probably had something to do with it too.

I think the fatigue is more based around players started preseason at the same time as usual, however the season should have finished between 1 and 2 months ago (March if a play off team or February if not).
Yet this season, the teams still have 10-18 games to play and the players have hit the wall, for those who started preseason in April it has been non-stop for 12 months already.