Rumours swirling around that the wildcats are interested in signing John Brown who was playing for UNICS Kazan in the EuroLeague before leaving due to the Ukraine War.

Interesting timing as Frazier has injured his hamstring at training & an article appeared in the West Australian saying management where considering replacing him.

Can't say I know much about John Brown but his stats look decent as do his highlights. Is he what the wildcats need? Will he improve the team & fix area of weakness (Rebounding & Defence)

A great defender but little else. Would be better help than Frazier

Good to hear management are being proactive.

"A great defender but little else."

Brown scored in double figures 13 times in Euroleague this season. Averaged 10.3 at 51% as a role player who feeds off others. Is exactly what Perth need to sure up their defence.

All players in euro league can play, they not thereto just make up numbers. Players bring different aspects to the game to form a team. Stats are not everything.

He looks quite a disruptive defender, in a finals campaign a strong defender like him could make a difference. Looks to be legit , high energy type which every team can benefit from. Would love him over Frazier.

I agree that stats aren't everything, but in this case Brown's Euroleague stats compare pretty favourably against Frazier's NBL ones. If he is 6'8 and a good defender then I dare say his intangibles compare pretty well too.

I'm guessing the likelihood of Cotton being naturalised in the next few days so we can have both is pretty small? ;)

If his game is as solid as his name then that's exactly what the cats need. Nothing flashy but does the job defensively and on the boards on a consistent basis. Then as Mr Steinbrenner would say.. Hire this man!

Images of him wondering perth streets.

John Brown had an individual workout with Wildcats today, looking into the paperwork apparently.

I am guessing this will happen pretty fast since he would have to play X games to qualify for the playoffs and X is coming up real soon?

Is there any word that United will sign Yudai Baba anytime soon?

Looks like the John Brown signing will happen asap. I don't get why the Wildcats have such a big salary cap. NBL needs to change their salary cap rules. Cairns will never win Championship unless something happens?

I've seen John Brown play a few Euroleague games. An exceptional pick up if the Wildcats to sign him. He would be picked up because Wildcats couldn’t defend Luil Acuil of United at all. Brown would help there in great measure

Looks like the John Brown signing will happen asap. I don't get why the Wildcats have such a big salary cap. NBL needs to change their salary cap rules. Cairns will never win Championship unless something happens?

Why aren't you asking the same question of United?

After the way Perth got destroyed in the pick and roll by NZ a change had to be locked in!! It was so bad.

Is there any word that United will sign Yudai Baba anytime soon?

Asks when his team will join the arms race.

I don't get why the Wildcats have such a big salary cap. NBL needs to change their salary cap rules.

Nekt minit, berate other teams for joining the Arms Race.

Cairns will never win Championship unless something happens?

Nekt minit after that feign concern for a minnow.

There is only three teams in it though, it's going to take a miracle for one of either Sydney, Perth or Melbourne not to win it, they clearly spend more than all others. NZ, Illawarra and SEM behind and the rest are also rans.

Not sure that is entirely true, there was a report a few years ago the year Eddie Griffin was with the Sixers that Adelaide were supposedly the second highest spending team that season. They just spend it in all the wrong places, the Sixers with Humphries, McCarron and DJ are likely spending a large amount again this season.

That being said the Big 3 do appear to be spending very big again this season.

ME (he/kangaroo)
Earlier this year

Yes, Adelaide is consistently one of the highest spending teams yet they're run by idiots. I read recently that Mitch McCarron is one of the highest paid players in the competition. I mean seriously... what the hell are we thinking?

Yes, Adelaide is consistently one of the highest spending teams yet they're run by idiots. I read recently that Mitch McCarron is one of the highest paid players in the competition. I mean seriously... what the hell are we thinking?

Some teams are just lucky AF, I mean whats the chances of the Wildcats finding a EuroLeague6ft 8 defensive power forward walking the streets of their CBD?

Oddly enough a defensive PF is actually what the Sixers SHOULD have got as soon as Humphries was questionable so the Sixers had WEEKS to prepare and came up donuts.

On the issue of McCarron, I will preface this by saying I do not know how much he is getting paid, but I think luring a big name local talent is generally a good thing (outside of Adelaide).

So so players that leave FLOURISH (Peter Bell)

Strange the good teams always find the right players at the right time, but if your in the run for a Championship like Perth, Melbourne and Sydney then you would be silly to not to join?

The Sixers keep stuffing up their roster. They were shocking on Sunday when I watched them at John Cain Arena. Withers and Dusty did barely nothing this time.

LB I will give Allan and Hogan but O'Reilly's best years were at Fremantle :D

Doesn't he have to play tonight and the rest of the remaining games to be eligible for playoffs?

Liam Santa said on Overtime that Russian clubs are not granting releases despite letting the players physically to leave Russia.

FIBA is having to step in an grant said release.

That type of thing may take time and he may not be eligible which could be awkward with Frazier hanging.

Again, makes me wonder why Plumlee wasn't brought back... last I heard was when teams were given 2 imports he was told to hang around and wait for Cottons citz status and he'd be re-signed of course that never happended but then imports went back up to 3 and still nothing about/from him. Would have done us a hell of a lot better having Plumlee instead of Hodgson and Fraziers output isn't better than purchase could give on the court

concerned no news on Brown - no luck getting clearance from Russia ? was a risk to go for a Russian league player.

Yea feels very unlikely the clearance will come through in time.

Surely Frazier would have been in the building last night unless it was a done deal?

I get the impression it will be announced tomorrow morning prior to tip off.

The West Australian said Frazier was not in attendance last night.

Cutting it very fine.. can they suit him up without a prior announcement?

I've made peace with it not happening, as that seems the likely outcome if his former team are being pains in the arse about it.

But I'm still holding out hope that the first we hear about it is when the Wildcats formally submit their team list for this evening's game and Brown's name is on it. If it's going to happen then milk it for maximum drama I say.

Unless FIBA work weekends all offices are closed.

It's an awkward situation for Frazier.

Yep, very awkward to be there knowing that the team tried to replace you but failed.
On the plus side, in a few hours all speculation is over, so if he's still here then maybe it's a weight lifted off his shoulders knowing that the roster is now set.

And he can't produce less so the only way is up.

Bizarre that he wasn't even in the building the other night if it wasn't a done deal.

He was seen in a bar while the game was on. Good for him. Shoddy treatment, but I guess that's life for a pro

Shades of a bitter Bevo sitting at the bar venting to anyone who would listen the season after his sacking. 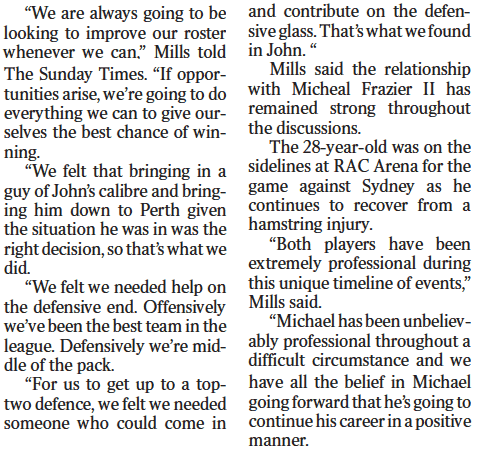 Bevo would be handy now, still a very good coach.

But can he contribute on the defensive glass?

I'd say his defensive strategy’s could