Players with NBL and NBA titles

Thought about this the other day while watching the NBL playoffs. Bogut came close, so did Chris Jent in 1995.

Delly's aspirations to do this are on hold, maybe Baynes will be chasing this next season as well.

Can only think of Gaze in this category, Ian Clark could be next.

Brett Brown has multiple titles at both levels, but in a coaching capacity.

Had never really thought about it. Yeah can only think of Gaze.

James Ennis also a chance to add to that if he can stick on the end of a good bench in the next year or two, though this season wasn't kind to him

NBA title winners that played in the NBL

Adrian Branch won with the Lakers played with Brisbane / Geelong

Vaguely think an NZ Breaker import had a title but cant recall.

Mark B
Two weeks ago

Gotta do both. Ingles has an NBL title but not one in the Association.

How about the NCAA-NBL-NBA triple crown?

Gaze came oh so close to one.

@Perthworld - yes, good stuff. Drewy is indeed on GOAT level status when you think about all the levels of bball too. An Olympic medal eluded him but he's #2 all time Olympics scoring table.

Miles Plumlee 2010 NCAA title with Duke and then 2020 NBL title with Perth. Buford has an 2008 NCAA championship as a player.

Have no doubt the club for women's players is bigger than the men.

Maybe one day we'll see the Aus hoops equivalent of a grand slam:

There's only one player who can do that currently - so the campaign to get Anthony Davis to Perth begins now. Er, he’s played for the Wildcats before...

NBA title winners that played in the NBL

Adrian Branch won with the Lakers played with Brisbane / Geelong

Vaguely think an NZ Breaker import had a title but cant recall. 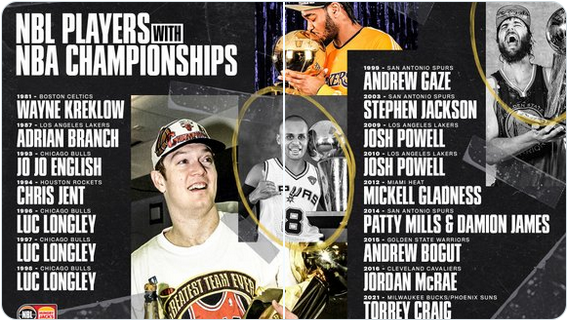 "Have no doubt the club for women's players is bigger than the men."

Yeah for sure. Ezi is the most recent addition there

Luc Longley wasn't really a "technically" though. Yeah he only played a couple of games for the Wildcats. But he was a local boy, he was just too big to not go the college route. At that stage it was almost unheard of to 0lay NBA without playing college ball first.

He also would have suited up for his local Wildcats for at least one season as a swan song. I believe he wanted to. That couldn’t happen due to insurance reasons. Will this prevent any future Aussie ex-NBA players returning home after their NBA careers are over? If so, would it be worth LK finding some way of buying out or compensating the insurance companies, maybe based on limited minutes or something similar. If that’s the case, I think it would be best to have them play in their home town/state (except maybe Joe Ingles perhaps). Would Bogut have lasted another season with limited minutes? These guys are not truly “marquee players” if their health is really declining, more “Spot minutes and pr” types.

Will this prevent any future Aussie ex-NBA players returning home after their NBA careers are over? If so, would it be worth LK finding some way of buying out or compensating the insurance companies, maybe based on limited minutes or something similar.

The issue with Longley wasn't that he was too expensive to insure. An NBL contract is an NBL contract, it doesn't suddenly become a massive insurance cost just because the guy happened to play NBA.

Longely got insurance to pay out on his NBA contract after suffering a career-ending injury. Any further basketball on his part would void that, and he'd have to pay it all back.

If he was just out of contract, it wouldn't have been an issue.

I was thinking that.

The funny thing is the graphic is directly from the NBL.

Jo Jo English played 5 minutes a game in the 93 Bulls team that won the championship, before MJ went to play bball

well he signed a couple of times and was then waived, played 6 games that year.

Those five minutes per were only over six games though.

Not sure if that is enough to qualify for a ring?

its enough for the NBL website to brag about it. I mean Gaze played 19 games and didn't make the playoff roster

@Perthworld - the OP was asking which players won an NBL AND NBA title.

The graphic you posted lists players who won an NBA title and PLAYED (not necessarily won a title) in the NBL.

The reply was made to Q Anon's incomplete list of NBL players with an NBA title. I even quoted to make it clear.

Reading there is no real criteria other than if the owner chooses to issue you one. You could say you were part of a championship team and not get a ring.

The NBA is loose with who gets considered to win a title, because its actually up to the team to give out the rings. Along with players, owners and staff get them too, and usually they're given to players who were on the roster at some point during the season (hence JoJo English).

Nobody seems to be questioning Torrey Craig on the above list. He did play for the Bucks last season, but he was traded midway and end up on the Suns who the Bucks beat for the title.

Yeah, Anderson Varejao lost the 2016 NBA finals playing with the Warriors but Cleveland could've offered him a ring after he played games with them in the same season. He told them he wasn't interested (it wasn't clear if they were planning on offering but he was eligible if they wanted to)

The following year he played with the Warriors before getting waived mid season. The Warriors went onto win a title and this time Varejao accepted a ring.

So technically, he could've got a championship ring 2 years in a row despite leaving the championship team months before the finals (and in one case playing *against them* in the finals)

The opposite extreme is someone who plays almost every game in the AFL and gets dropped for the Grand Final and misses a premiership medallion, like Derek Kickett famously was in 1993 (and many others have been in similar situations). Or a club legend who plays 300 games for the club- and plenty of games during the season, but falls out of selection during the season, like Nathan Jones last year.

(Well Jones went home for the birth of twins, but probably wasn't going to be selected anyway)

Made me recall that Cuban wasn't going to issue any rings , saying he was going to do something unique , then the players demanded that they got a ring

Yep, I've never liked this. Bob Murphy, the Captain, missing out for the Bulldogs when they finally won too.

I've thought maybe clubs could step in and offer some kind of medal or whatever to everyone they believe should get one. Let the AFL reward the 22 blokes on the day, but the club gives everyone on the list (and perhaps the coaches and other football dept people etc) something. It takes more than those 22 guys to win a flag.

If the Saints ever won another one I'd like to see them do this. It's not like they'd have a long line of "but what about me?" from past flags to appease

Reading there is no real criteria other than if the owner chooses to issue you one. You could say you were part of a championship team and not get a ring.

Strange, in most sports and leagues being officially recognised as a champion is regulated by the ruling body and in some unclear cases goes to a special arbitration board for ratification. In theory an NBA owner could be shitty with an individual and refuse to issue them a ring.