Just announced on his Instagram feed. Not a surprise.

Gaze alluded to it in the CG broadcast
When Lisch and Randle are running the point , no reason for him to be there

Lisch isn't a point guard though.

I can unequivocally announce he is coming to Cairns. I have the inside scoop.

Oh please, not to Taipans.

Think of all the JC5 tees Caddee can sell in Cairns!

Damn [sarcasm]. We will miss his lock down D [sarcasm] consistent shooting [sarcasm] and overall consistent great scoring on a regular basis [sarcasm]

I was told he fell in love with the backboard, hoop and net system while up in Cairns for the Comm Games

Chairman Of The Bored
Two years ago

Apparently this one time he was in a car accident. Who knew?

Casey quizzed him on it and Gaze jokingly changed the subject pretty quick.

Why so much toxicity towards the guy on here? I'm happy for him. A new team might just be what he needs to improve and turn a new leaf. Good on him.

He needs to go back to Adelaide

Good luck to him wherever he ends up.
I'm with you #067, it seems easier for people to be salty these days.

"A new team might just be what he needs to improve and turn a new leaf."
That's why the Kings fans are happy he is leaving. he needs to get a game for once in his life. Sorry. #notnblstandard

I intentionally didn't go to any Boomers games in CNS because he (and other second string players) were in the team. Good luck getting me to a Taipans game with him in the squad.

What would he do in Cairns if he did end up there? Main backup to an import PG? Would you rather Shaun Bruce, Cadee or Weeksy in that position? Or a starting #2?

Jordair Jet and Cadee do actually compliment each other very well in that one's a defender who can't score at a decent clip and the other is happy to bang up shots all night but can't play D to save his life.

Has Cadee ever played in a play off team, didn't want to play behind randle and Lisch probably. Kings management been worse than it was pre new organisation. Do they have any Sydney players left now or still bringing in Melbourne tigers juniors. Wilson has been signed is the rumour and Pinneau already re signed.

Cadee flops on every drive, initiates contact and then gets the call because he is a flog. He deserves Adelaide.

Has Cadee ever played in a play off team

To be clear, I don't know where Cadee is headed, but I feel like a 1 in 7 shot is good enough odds to make wild predictions

Not surprised at all he's going. He's 27 and probably doesn't want to spend his prime years backing up Lisch and Randle. I personally don't think he's starting quality in today's NBL given he is a one-way player who isn't consistent enough to justify big minutes at that position, but he might do well in a spot like Cairns. Good luck to him.

Desperately need a backup 1 now in Sydney, and I'd be tempted to go an import 1/2 off the bench ala a Moore if we can nab an Aussie big like Kay to plug one of the frontcourt spots with.

Some talk he would end up at Brisbane

Young Tom Wilson would be a great back up to Randle and Lisch.

Wilson is almost a certainty so at least you have a 1/2 backup there albeit an inexperienced one. They should be able to sign at least one of Kay, Hodgson, Majok or Kickert so they can sign an import combo, hopefully a defensive one if they wish to go that route.

Wilson is not that good, plays pour defence, fouls a lot,they should have chased Naar who is a Sydney boy or even Juliana who also was at Sydney boys and was dp last season.

Cadee's girlfriend is from Perth, correct?

No salt it's just that Cadee isn't NBL standard yet this season at every opportunity commentators like Heal were praising him. And now he thinks he's better than being a backup, LOL, what delusion. Plus that shirt/apparel line hahahhaa.

No, it is not trolling. The guy plays no defence and jacks up bad shots.

"Think of all the JC5 tees Caddee can sell in Cairns!"

I didnt know what this meant so I do what you walys do, I googled.

Then I laughed. Alot. How the hell does he have a shirt and who the hell would buy it?

Well I know how he has it, he has them made but who buys this stuff??
Comical!

quite a few bitter people in here. these look fine to me. you don't want one then no one is forcing you to buy one. 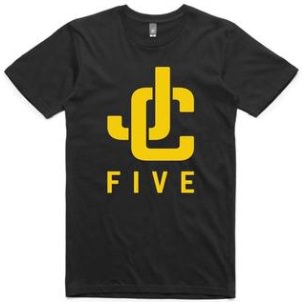 Exactly #100. The guy must be so delusional.

Serious question did you guys buy one?
If so where do you wear it?

I just looked at the Sydney kings Stats.

Cadee has the 7th highest avg in points for a team that didnt even make playoffs...

Yet he thinks he is worthy to sell his own merchandise?

I dont get this at all, sorry!

School holidays judging by the posts.

Wilson confirmed to Kings by Boti

I dont get this at all, sorry!

The Sydney market has previously bought :

Based on the above statistical trend Cadee concluded they'll buy anything.

Cadee is a major jacker. About one game in 8 he is real good

Have to say it, his dad will have had a better career than him by the end of it all.

And yes he was severely set back with his car accident, but that was some time ago and he had had enough (albeit few) outstanding games since then to say that it is his inability to consistently output at or near 85% of his best, game in game out, and failure to round out his game, particularly defensively , that makes him a target for "under-performing" tags .

Yeah, a cool and hip Christian who knows their ball!

This is another example of fact that Gaze can't coach!!

Gaze is very close to the Cadee family, JC is local junior but Gaze doesn't know how to fit him in the kings system to make sure he is able to utilize his skills to consistently and inspire more local players to one day become a Kings player!

JC like recent alot of other former Kings (Brandt, Moller, Weakes, Kevin White) will have a great season next year!

I'm not a JC fan, but I'm astounded there is so much hate on here.

Who really cares if he is leaving and where he is going? Clearly he can play in the NBL, however I agree with some others that it would do him well to be more consistent.

It is his choice if he chooses to go. He has his reasons, presumably wants to be starter, more money or maybe he just wants a change?

I wish him and all the others that move teams well.

I agree. Not sure why he attracts so much animosity.

Because he is overrated. Particularly annoying was Heal in commentary talking him up during bad performances. Is this all to appease the Cadee family?

Don't be surprised if he ends up back in Adelaide

My tip is Brisbane but if he want to Adelaide he would be a huge upgrade on Teys.

Hope in hell of going to Adelaide. Not highly rated there at all.

Teys is 11th man, Cadee has been a starter, bit difference there, plus Cadee is probably on 4 times the money, the way the kings pay there players.

Maybe a "Yeah, a cool and hip Christian who knows their ball!" but the ability to catch it in a game helps.

I don't hate Jason but I wonder if he will be remembered for more than journey man that jacks up shit you wish better shooters would have the confidence to take.

I wouldn't be too worried if he plays for your team next, he will move on next season again.

Well said - we hate his game not the player himself. People on here seem to have trouble differentiating between the two.

If he was useless as you haters claim he wouldn't be wearing a gold medal around his neck.
Without question he was the highest performing guard from any team off the bench this season. Give him a break.

Because he is overrated.

How? Almost everyone bitches about him.

There are thousands of NBL players who don't have one. I'd say they mean something to the players, coaches, family and fans supporting the Boomers.

Heading to the Bullets. Signed but yet to be announced.

No one hates him,, it's just that he is talked up as a messiah by media mates of his family, when he is just an very hot and cold player with poor defence,as soon as he got to fight for his spot and doesn’t get over paid he ups and leaves. Been given opportunity through out his career because of his name that others would kill for.
The CG gold medal is an achievement he should be proud of but a lot nbl players could’ve played in that tournament with the same result, that Canadian couldn’t beat or university games team last year.

Doesn't play defence
Is a chucker.

It's not that hard to see why is he overrated and his game not liked.

Third best 3P% in the NBL amongst locals, behind Barlow and Deng. Might as well keep chucking while you're hitting at that rate.

Posted it in the Gliddon thread, but Gliddon was fourth and Kickert also top ten. Could be useful for Brisbane if they get them all.

But he plays no D whatsoever.