Pretty good hitout for the Opals this morning I thought, and worthy of not being buried in a Liz thread.
The prime movers in Mitchell, Allen, Talbot & Magbegor all stepped up as needed, O'Hea & Tolo showed that they still have a place, and George & Ebzery both took a while to get going but ended up both being important contributors.

I thought the end result was more about how awful the USA was rather than how good we were, but ultimately I don't have my sights set on winning a gold, I just want this team to fight for a medal. And we look up for the fight.

Very proud of the Opals. It has been a lot of years since we've beaten the USA senior team. 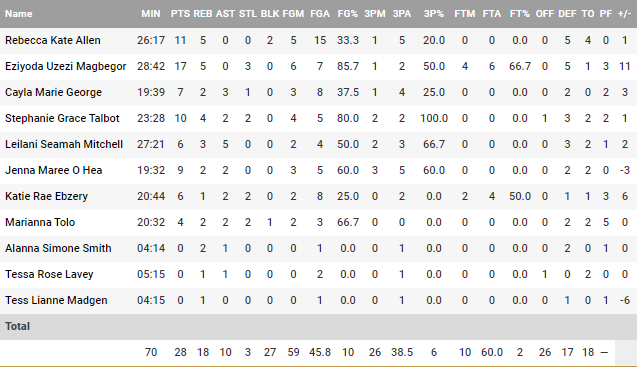 Madgen just looks so slow at this level.
Magbegor the standout with Allen.
Still would have had Sami over lei, even as the pg.
Ohea good off the bench.

Magbegor with George at Melbourne helps.
Good to see no more 'into Liz' lobs

Everyone said we wouldn't medal without Liz. Now what do you think

I doubt we will medal tbh.

USA will wake up
Serbia imo

Uniforms were good, should have kept them...

The ball movement was so much better without Liz.
Very doubtful that we will medal. Old bodies by the end I think will be overrun by usa, Serbia,
Maybe France, Canada, Japan.

What helps is every team missing key players.

Why does Alana Smith only get 4 minutes

Madgen need to go, smith has become complacent and does not try, she needs to be cut and work her way back.

Not a fan of cuttin lucas for sandys husband again.

Why is Olaf there?? I thought he was with Russia??

Olaf can coach. That's the difference

Olaf is chicagomskybassitant. He got booted from Russia a year ago after they lost 80% of games.

Still a chance of maybe bronze without Cabbage.
Team is better off without the distraction.

Lavey and Madgen just don't suite this level of basketball.
Heal n Nicholson would have come in handy.

Wow guys - they just beat the USA.
How about we acknowledge a hell of an achievement.
Players not scared to attack,played good D and looked locked in as a team.
I've watched them for many years and that was a good comeback win.
Well done Opals!

We beat usa in an exhibition. When we win in a actual tournament, I'll give them as much praise as you.

Beat the USA, people here still want wholesale changes made to the roster.
It seems a lot of people here think it's best to send a development team to the Olympics every 4 years.

241, come back after the olympics and tell me we don't need changes going forward.

How would it be a development squad when the suggested players were in the larger pool for Tokyo selection? It's a matter of opinion, mnost people think Sami should be on the team over Mitchell, that’s crystal clear.

and you want to make them weaker? Lavey has a proven track record at this level. Heal's most recent attempts against WNBA opposition ended embarrassingly. She needs at least another year of intense development.

Lavey never made the wnba and she's never done anything at fiba level. She averages 3 mins for Aus over several years.

Heal can shoot, heal can drive. Lavey may be the better defender, that's it.

Lavey had a good wnbl season, her best in a few years but she is a wasted roster spot. Sandys got Mitchell, her favourite pg. Ebzery, the starting pg at the WC and madgen, backup pg at the WC.

Lavey or Madgen, doesn't matter. 1 should not be there, especially when you have a great defender in nicholson or a streaky shooter like heal.

Look at the minutes, smith, Madgen and Lavey around 4-5 mins each. Everyone else 5-7 times more gametime.

Always good to get a win over the US. A case of Australia playing well enough to capitalize on US mistakes, of which there were plenty. In the third quarter the Americans made the mistake of forsaking outside looks for banging the ball inside to take advantage of a favourable size matchup. They just did not work as hard off the ball setting screens. Britney Griner is not a good mover inside - ask her to move laterally or spin, she loses balance and loses control over her shot. Too much of a right hand bias - surprising that this is so pronounced at this level. Stewart was all class - threatening inside and out. A wonderful player. She's my pick for MVP of the coming Olympics tourney. And Australia defended really well as a group - they way they disrupted the inside pass and had guards snatch on any crumbs. Really impressed by Magbegor, who was consistently good. Ditto Tolo. Allen, George, Ebzery and Talbot had good moments, but Allen is not a great passer, turned the ball over too often. George did a sterling job defending Griner, Fowles and Stewart, although the latter beat George's defense in the final seconds of the game, got an open look but failed to drain a 3 that would have tied the game. In the final analysis the US will learn a lot from this encounter and should gain a better appreciation of (a) the limitations of their bigs; and (b) the potency of leading international teams to punish sloppy US play.

George where she should be, at centre.

Against smaller teams, quicker teams like Japan or Korea, Allen should play the 4, Talbot 3.
We have lost to japann4 straight times because of ball movement and speed.

Taurasi didn't even play. Get a grip people

We were second in odds, now without Liz, we are fifth.

Both sites I just checked still have us as #2, albeit quite a bit closer to #3 (France) than we were a week ago.
US have shortened for gold.

Betting site I saw had us 4th

Imo, usa will end beating every team by 15+.

Beating them now will wake them up. If we lost today, they would remain complacent.

Huge problem with big teams and using past due by date players. Swan songs for bird, taurasi etcetc over players like ogunbowale doesn't seem right.

Spain has palau who has been crap for Atleast 3 years, she’s almost 42. They have salvadores and Romero sitting.
USA has bird 41,vtaurasi who can barely play with constant injuries 39. A bunch of players can fill in and do more.
Aus has Mitchell, now 36 when we have Whitcomb
Belgium has wauters 41 when they have geldof
Canada has gaucher at 37 when they have konig