After another disastrous campaign drawing to a close we can at least look forward to next year.

Surely Walsh and his ownership group will be beginning to pile some pressure on Dan Shamir to yield some results next season, a finals appearance would be nice after 2x covid affected years on the road.

I'm expecting both Dieng & Besson to get drafted but it would be nice if one or both were left in the NBL to further develop their games.

Bach hasn't been as good in his second season although he has had less opportunities but wouldn't be on big money.

Loe's minutes have been steadily on the decline but so have his numbers, especially shooting percentages.

Shamir should be under a little pressure, but I think he gets some slack given the Breaker's situation over the past 2 years also. I don't see it happening, but I'd like the Breakers to get a favourable schedule next season, perhaps majority of games at home - the teams they play 4 times, play 3 in NZ.

They should keep Dan Shamir for his defensive energy. 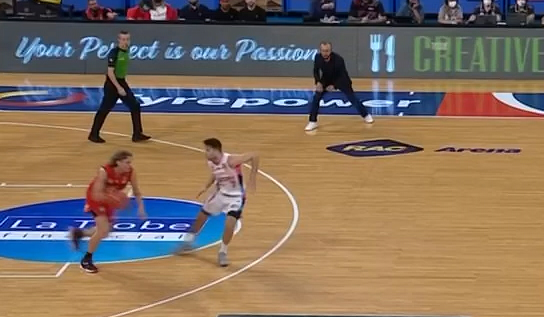 Siva hasn't been that good, WMW would be better starting with Siva off the bench. Bach is a good player, just got no time, his agent should sound out Cairns where a defensive guard that can hit the three would be useful. Loe gone. Delaney has regressed, should look elsewhere. Shamir sounds and looks like a good coach but results say otherwise. Barlow missed a few seasons due to injuries but came back great, hopefully Abercrombie can, gun player.

That's a great pic, what the hell is he doing that far on to the court? lol It's not like he's a foot over or something and looks like he's about to kneel down too.

Do we know what happened with Shamir's supposed contract extension? It was never officially announced by the Breakers or the NBL so presumably it never happened. If so his original 3 year contract expires at the end of the season and you would think the Breakers would move on from him now.

I didn't realise Shamir was a player coach.

Rob Loe's got another year to go on his 3 year contract which was another crap Walsh decision not much chance he walks away from that.

That's a great pic, what the hell is he doing that far on to the court? lol It's not like he's a foot over or something and looks like he's about to kneel down too.

I wasn't kidding, he was literally playing defence.

ME (he/kangaroo)
Earlier this year

I am wondering how much longer the Breakers can sustain a team away from home.

I wouldn't be against keeping Bach, he has played some decent patches with limited minutes.

The team is much better with Siva on the floor and it looks like he enjoys mentoring the younger players.

When does Waardenberg finish college ?

He's finished now +, he would be a great rookie signing

"the teams they play 4 times"

If the draw is designed the same as this year, they'll play JackJumpers 4 times and each other team 3 times.

Presumably they did it for the same reason AFL does it - crowds and viewers.

I imagine they'll want to do that again next year.

For Breakers next year, maybe NBL should allow them to choose which 4 of the other 8 teams they get to play twice at home? In that scenario, which teams would they want to pick - ones they find harder to beat or easybeats? I'd pick the harder teams and hopefully get a couple more wins via home court advantage.

Perth would def be one PeterJohn, rivalry from finals appearances over the years and cut down NZ's travel.

Hmm, this is a good question.

Wetzell and Galloway are signed for next season. Delany and Abercrombie should re-sign. Timmins has a team option and I suspect the Breakers will want to develop him over keeping Rob Loe and the various challenges he's had over the years (even though Loe is an analytics darling).

This team has been poorly constructed in terms of lacking the role players needed to balance the on-ball guys. I don't know what it'll take to get this roster rebalanced again, and I have concerns about Shamir/Walsh (though its more likely with Walsh than Shamir). Here's a possible roster:

I don't think there's a unsigned Kiwi guard at NBL level (who doesn't have the last name Webster) to play bench minutes, and I'd like to see if we can incentivise Cam Gliddon to head across the ditch. Jordan Ngatai's 3pt and defensive ability has jumped a level, and would compliment that bench well.

Laughable some people are saying to keep Siva, obviously you haven't watched enough games and just going off his reputation.

It's time for you to go Shamir. It's time.

Anyone who plays Rob Loe is a fireable offense alone.

Team needs to be gutted.

Ambercrombie can stay on minimum wage only.

Both parties would benefit from Delany seeking opportunities elsewhere.

Three new GOOD imports (Besson would have been a good NS, but is a wasted import spot, and Siva doesn't compare to other top-shelf imports).

Build around Wetzell, WMW as a reliable backup PG and sometime SG, and Galloway as an ok backup wing.

Beyond that, see what's available on free agency.

(and anyone suggesting that Gliddon is a solution, just hasn't been paying attention).

With Wetzell now gone you would hope NZ are hot on the heels of Waardenburg.

Delaney was all NBL second team a season ago. The entire team has been living out of a suitcase on the road for the whole season, I'm not surprised his numbers are down.

With the borders now open in Nz and Covid restrictions largely lifted, it’s safe to assume that next season will be business as usual with home games.
If their record stays as ugly as it was this year then you look at a new Coach and start rebuilding.
Adelaide are 25 and 8 and have had the luxury of playing home games and Cairns aren’t much better.

Breakers were terrible this season. They need to look from top to bottom. I know being on the road for the past two seasons doesn't help but there’s no excuses.

Rob Loe had a great game against the JackJumpers. Just not used in properly. Breakers need to think hard who to keep and who to put on the Free Agency list.

Loe did play well, he wasn't guarded by any true five man. Yes he should have had more time this season, he’s no starter though and defensively not great. There best player is still Abercrombie, WMW should be a focus at starting point guard. Delaney had only fair season but should be held onto if possible. Build around those three players.

True William McDowell-White is a fantastic player but he can't be on the bench too long otherwise he becomes rusty. Breakers will play better at home but it all depends which imports they bring in. Their better off going big and signing John Mooney and DJ Newbill from Japan then bring back Siva.

I would bring back Siva, he has shown when healthy he is a positive influence for NZ.

WMW can play minutes at the 2 or run the show when Siva's resting.

Bach hasn't been terrible, he's just had very limited opportunities with Besson & Randle playing SG so I wouldn't be adverse to him on the bench especially as he won't break the bank.

Do NZ go with an Import 2 or 3 and which local free agents do they chase to plug the holes?

He'll be hard to bring back though, will be sought after elsewhere.

Siva was at least twice the player in Europe, some people easily pleased. Like machado nowhere near as good as they were.

Siva battled injuries early in the season and has lived out of a suitcase for the entire season, are you surprised he hasn't played his best basketball Dunkman?

In fact everyone on the Breakers team has been inconsistent bar Wetzell and even he had a bit of a dip in form mid season from memory.

Hopefully with the borders open in NZ they can get next seasons team together as early as possible and get a decent pre-season in and put these past 2x seasons behind them.

Abercrombie & Loe are apparently under contract for next season and the Breakers have signed Sam Timmins to a full roster spot for next year.
It will be interesting to see if Walsh & Shamir keep Loe on or pay him out and replace him.