Mock here to say i simply CANNOT see the MIGHTY PERTH WILDCATS not winning the NBL any time soon. We simply have a better off-court and back-office culture than any other club. To the outside observance, all hope looked LOST midway through the season but we SWOOPED on Bryce Cotton, the TRUE mvp of the league.

So much for Adelaide phony contenders if I ever saw one. You need to win when it hits the BUSINESS END of the season and Perth have the culture to do that. No other club can match us.

Let us build statues of Gleeson and Damo and bask in the GLORY of the coming dynasty.

This is what happens when the season finishes

Mock, stop being so classless. Your team won, be gracious about it. Sure celebrate the win, but don't start attacking other clubs as pretenders etc.

As for dynasty, it remains to be seen. Here are what I see are the challenges for a Wildcats three-peat and beyond.

1) Damo is getting older, he was all class in the finals but there were times where he was also consistently beat (like against Kevin Dillard).

2) Matt Knight is most likely going to retire. Who will the Wildcats bring in as the starting 4? He didn't have a great year but still a massive hole defensively. His D is under-rated.

3) It is likely Prather and Cotton are not coming, this exposes the Wildcats to future Jaron Johnsons and Andre Ingrams again. This is a huge risk.

4) The Wildcats don't really have any up and coming talent. Theres Mason Bragg, Corben Wroe, DKD, thats it.
With all due respect thats not a strong future core.

5) I believe teams will get even better next year. Potentially the Hawks and Taipans could get a boon of cash from the Luxury Tax payments. And all teams have seen what a successful model looks like and will model accordingly.

By all means enjoy your win but be a bit humble.

While this is a dumb thread, wildcats fans copped it all year from people glad to see them fail. Those guys deserve a bit of shit.

Fair points except for the person who DARED say I was a troll. I certainly am not.

I reiterate my point about the wildcats CULTURE and I say do not sleep on DKD. There is a fire in his eyes when he plays and a hunger to learn. Trev will guide him into being a VERY strong player who can play big minutes, play hard, give 100% and be a great leder.

I dare you to not capitalise for emphasis

Gleeson is a flog!

If you replace the word 'culture' with 'sugar-daddy' in the OP then it makes a lot more sense.

What excuses for the two other grand finals ??? Jack would be laughing at letting Bevo who chokes in the grand finals. Well done jack

DKD and Bragg especially, seem to have the right attitude on the court and even on the bench during big plays that will serve them well in this team.

Can't see that from Wroe.. must cut immediately, has been around longer than the above duo and hasn't brought much at all since.

Here are Freethrows 3 golden rules for dealing with posts by Mock: 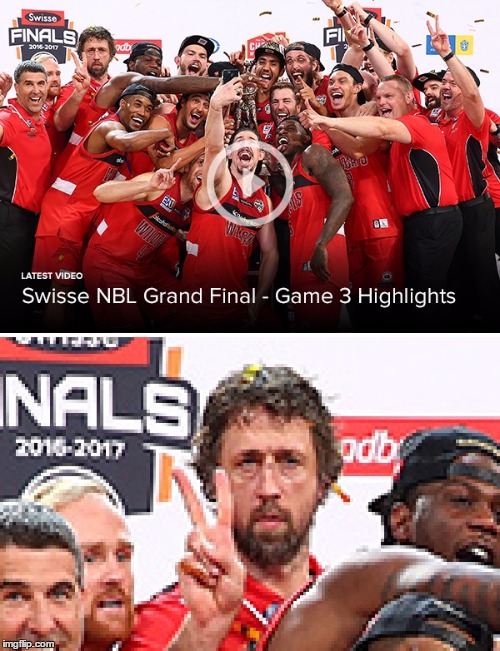 Bevo would have won the title too with the same team. Stupid bevo trolls.

On the other hand I don't see Gleeson leading a budget Hawks into a GF...

The "Gleeson is alright" crew and the "Bevsexuals"

Rabid Wildcats fans who like to troll a former championship coach (how ungrateful) vs. normal, objective people.

Easy to say that anon when he wasn't the coach...

"Rabid Wildcats fans who like to troll a former championship coach (how ungrateful) vs. normal, objective people."

Agreed. He was the bees knees in 2010, but now feel the need to invalidate his tenure. I just don't get that at all. Lets keep in mind that Gleeson was also exposed when he had DeAndre Daniels as the star import.

Again....celebrate the Cats and Gleeson's achievements but keep it classy. Dumping on Bevo != Classy.

What excuses for the two other grand finals ???

What other two grand finals?

The two grand finals when obviously the injuries the Cats had means Bevo is a bad coach.

Not who you think i am.
Years ago

Shove it, after we dump Gleeson in a few seasons' time we'll bury him in %$^# just like we have buried every other coach we ever had , after we got rid of them.

Haha damn, I read that as Nat at first.

We expect Championships and nothing else.

Lovebroker the cats still made the finals with Daniels and as i remember it we had a series of injuries in the tail end of the series and undermanned in the finals.

And they made the playoffs every year under Bevo, falling short largely due to injuries at the tail end of the season. What's your point?

My point is why is Bevo even in this conversation, he quit the cats and is the coach of the hawks. Easy to say any other coach would have won the championship with this team, reality is they didn't. Do i think Gleeson is the best coach in the league? No, but ffs give credit where credit is due...

It is hilarious that people think bevo is this "Master" coach, just because everyone likes him as a person. He's a great bloke but only an above average coach in the NBL.

Bringing in Cotton was the key. $20k+ per week was also the key.

And boy did we earn that $20k+ per week back with interest!

Apologies from Wildcats fans all. It looks like one of the kids got out of their cage again....

Is that sustainable in NBL... Bendat croaks goodbye buying titles.

The best tales are the ones that grow taller over time. Will it be $30k per week tomorrow?

The cotton $20k a week rumours hold some truth.

He's the highest paid wildcats import ever - based on his tenure. What he got in his short time is probably what most imports get for a full season.

It's good for wildcat fans as the front office will see money = results. So they may spend again next season.

Let's not have the facts get in the way of those who know nothing.

20g Aus is about 15g US, I reckon it's quite feasible for a player of his talent, pedigree, certainly by the time you add in housing and other on costs. A good investment for return, no Cotton no premiereship.

I wonder what the extra profit would be for the Cats from hosting 3 playoff home games + championship & general merch sales + possible additional sponsorship & memberships as a result of being champs, all which which they would have missed out on if they'd missed the playoffs.
I'm guessing it would offset Cotton's salary + cap tax bill.

Not that you can apply that same logic across the board, since all 8 teams can't go out and invest in a Cotton and win the title as a result, but it worked out pretty well for us this season.

Why can't the numpties understand the permutations of what spending a little to gain a lot? So many numpties. So clueless