Working out the World Cup draw

Correct me if I'm wrong.

Round 2 onwards. We play Group G. So Lithiuania, France and Dominican Republic. The top 2 of this pool move onto the 1/4 finals. So if we win 2 of 3 we likely move on. Then we would face most likely USA or Turkey depending on whether we finish first or second in second round.

Am I somewhat right?

Ah yes because the wins carry over to the next round? So effectively we would have a one win headstart over Lithuania if we win tomorrow? If we lose we have to make up the point.

I broke it down here:

Nostraballmus sees that if we are thinking medals we need to take care of both Lithuania and France.

If we finish top of group L, then we will play Turkey or Brazil in the QF.
If we finish 2nd, we will almost certainly face USA.

We play 5 games.
Obviously, if we win all 5, then we finish 1st.
Drop one, and depending on other results we could end up in a multiway tie

It will all become clearer tomorrow as the top 2 teams in each sub-group are playing off. So either us or the Lithos, and presumably France, will go into the 2nd round with a one game break.

It's a shit draw, and why I have said from the start that we're unlikely to make it past the QFs.
Nothing I have seen so far, in the bumbling and stumbling, makes me think we can get through undefeated. Which means at best facing USA in the QF.

Thanks LC. Sums it up well.

So if we lose to either France or Lithuania, we need it to be a close loss in case we end up in a three-way tie for two spots.

Bear thinks if we think too far ahead we are over thinking it!

Its simple, same as any tournament play, Survive and Advance, just keep winning.

"To win you must win" - Jack Bendat 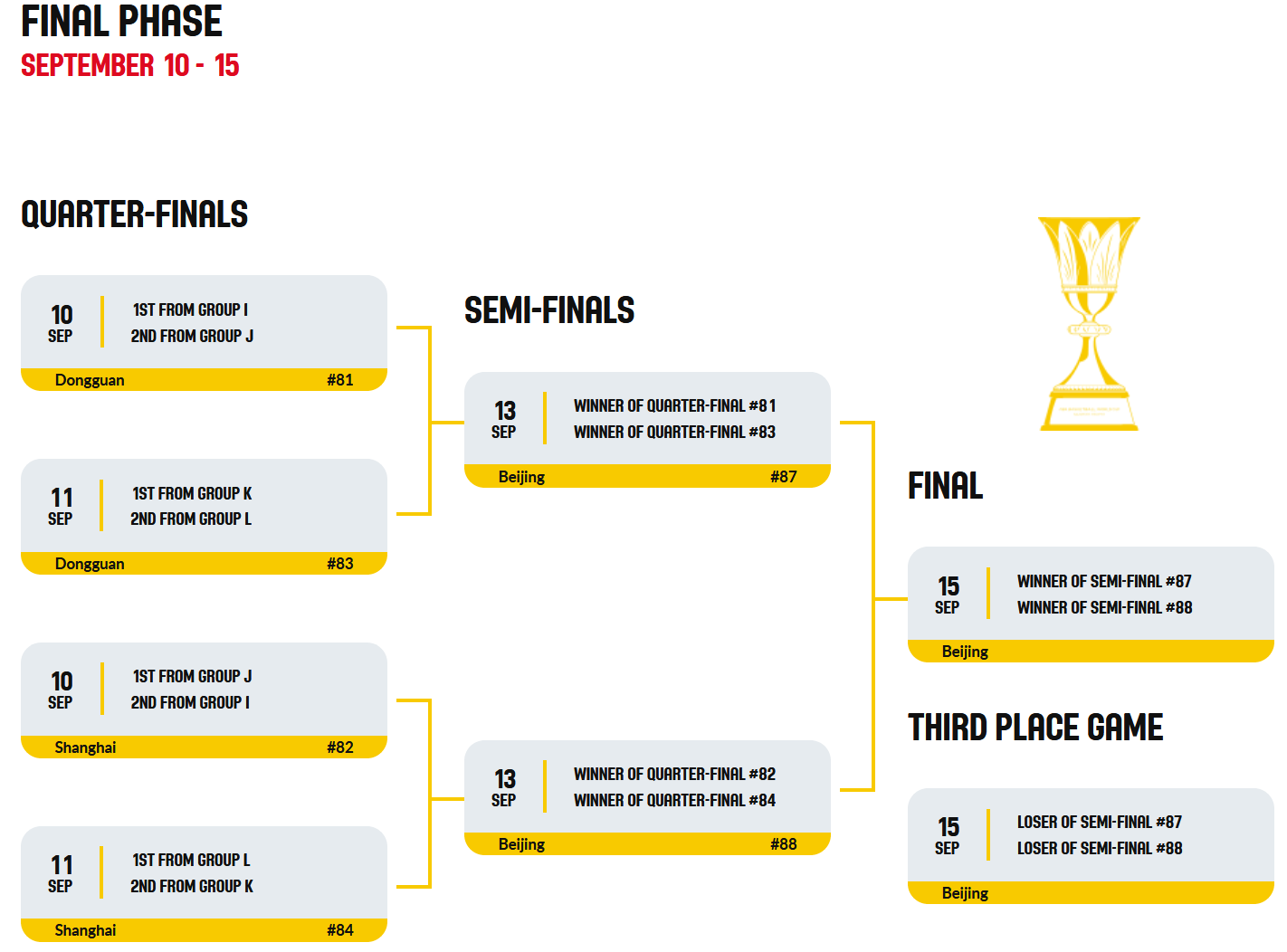 We are in Group L, USA in Group K.

Finish 2nd in Group L and we face USA.

Finish 1st then either Brazil/Greece/Czech Republic

I don't like our chances against USA, Greece or Brazil atm.
Czech a good team but heavily reliant on 2 players.

"Finish 2nd in Group L and we face USA."

If they finish first in Group K. No guarantee of that just yet.

"I don't like our chances against USA, Greece or Brazil atm.
Czech a good team but heavily reliant on 2 players"

Probably didnt like our chances against Lithuania either lol

Perhaps this thread is more relevant for this. The classification round is under way and this has implications for Olympic qualifications. It also matters for world ranking points.

Tonight China defeated Korea in a close finish. China with their 2nd win, but I believe this still isn't a guarantee to get that highest World Cup placing in Asia.

The final world cup ranking depends on their *placing* within each group of the classification round, not necessarily wins. Currently Iran and China are both placed 2nd in their respective groups. I can't find any clear information about how they are ranked from there, but I assume it is based on wins then points differential.

China will play Nigeria next. Iran will play Philippines.

So if Iran beat the Philippines as expected, and China loses to Nigeria, they will both finish second in their group and Iran could get that automatic Olympics birth from points differential. Although knowing FIBA, they might obscure the final placings system to somehow let China into the Olympics anyway.

It is a very complicated ranking system...

... but world cup results are weighted very highly (2.5 times weighting compared with 0.4 times weighting in Asia qualifiers). Notice also that winning/losing margin matters, not just the win. Also the ranking of the opponent matters. So these final two games remain important to New Zealand for their world ranking.

Would you believe that New Zealand are current ranked 38?